Tips for a clean release 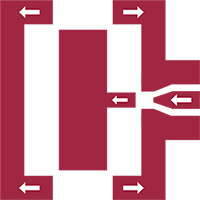 The coefficient of friction of copolyesters such as Eastman Tritan™ copolyester is at its highest near the heat deflection temperature (HDT) of the material—and competitive materials generally freeze at a higher temperature than Tritan. Keep this in mind if you’re repurposing a mold that was originally designed for the cooling temperature of another plastic. Parts molded with Tritan must be adequately cooled to withstand ejection forces during demolding.

Draft—Part design features with minimal draft, such as long cores and deep ribs, often result in high ejection forces. The Eastman Design Services team recommends that all wall​ surfaces have a minimum draft angle of 1° in the direction of draw.

Polish—Polishing mold cavity features in the direction of draw will reduce the coefficient of friction and result in lower ejection forces required.

Mold steel coatings—Several mold steel coatings have been successfully used to reduce the coefficient of friction and required ejection force. Ask Eastman Design Services for a description of these coatings.

NOTE: A textured surface may affect all three factors and should be considered when you’re designing the mold. Working with Eastman Design Services early in the process can help reduce frustration and cost later.